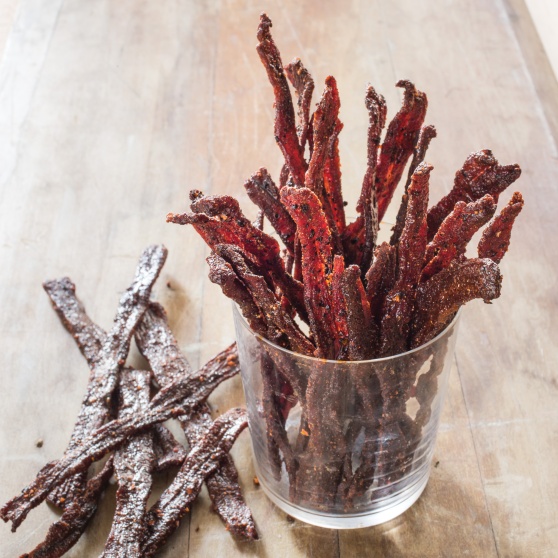 Why This Recipe Works: There are few things better suited to the paleo pantry than homemade beef jerky: Just a few seasonings and a low oven transform flank steak into an addictive, protein-packed snack. With this in mind, we set out to create a foolproof, flavorful recipe. Before being dried, the meat is almost always rubbed with salt and sometimes spices, which aid in preservation as well as flavoring. In modern jerky-making practices, this step is often achieved by soaking the meat in a salty liquid called a “wet-cure,” which is essentially a marinade. Although nearly every homemade jerky recipe we found opted for this approach, we decided to go with a dry-rub method. There were two reasons for this decision: First, the wet-cure had a tendency to dilute the meat’s flavor and break down its texture. We wanted jerky that was well seasoned but still had the texture and taste of beef. Second, there was the time consideration. Why add moisture to something you ultimately intend to dry? For our rub, we used salt and pepper along with paprika, fennel, and coriander to elevate the natural flavor of beefy flank steak. We also added a small amount of maple sugar to the rub, since its subtle sweetness would complement the earthy spices. We found that cutting the steak thin—into 1/8-inch-thick strips—and placing the strips on a wire rack during oven-drying greatly shortened the cooking time. For jerky that was more tender, we sliced the meat against the grain, while slicing with the grain yielded a chewier jerky.

For spicier jerky, use the larger amount of pepper. To make slicing the flank steak easier, freeze it for 15 minutes.

2. Pat steak dry with paper towels and slice into 1/8-inch-thick strips with grain (for chewy jerky) or against grain (for tender jerky). Add steak to spice mixture and toss until evenly coated. Arrange steak strips on prepared racks, spaced about 1/4 inch apart, and refrigerate, uncovered, for at least 12 hours or up to 24 hours. Remove steak from refrigerator about 30 minutes before baking.

3. Adjust oven racks to upper-middle and lower-middle positions and heat oven to 225 degrees. Pat steak dry with paper towels. Bake until steak is dark, somewhat dry, and firm to touch but still pliable, 2 to 2 1/2 hours, flipping steak strips and switching and rotating sheets halfway through baking.

4. Pat jerky with paper towels to remove any rendered fat and let cool completely, about 30 minutes. (Beef jerky can be refrigerated for up to 1 month.)

To easily slice flank steak, freeze for 15 minutes. Slice into 1/8-inch-thick strips with grain (for chewy jerky, as seen here) or against grain (for tender jerky).

For media and sales inquiries